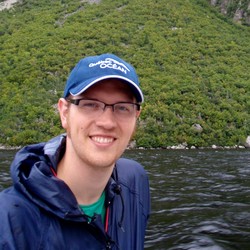 I’m fascinated by how changing ecosystems and patterns of human behaviour will alter the abundance and composition of species in fished communities. Marine and freshwater communities can change rapidly, with previously dominant species suddenly collapsing, and previously rare or absent species exploding in numbers. My research focuses on understanding the causes (both human and natural) of these rapid shifts, detecting them as they occur, and understanding the role that variation in species interactions and movement patterns plays in shaping how resilient fisheries are to these shifts. I use long-term data sets, mathematical and computer models, and modern statistical techniques to better understand these complex systems.

Prior to starting at Concordia University, I was a Research Scientist with Fisheries and Oceans Canada in St. John’s, Newfoundland, and continue to work with large-scale marine data from the Newfoundland and Labrador Shelf. After working as both a theoretical ecologist and applied fisheries scientist, I have realized that there is no real line between basic and applied research. I aim to work on problems that both extend what we know about the forces shaping the natural world, and answer applied questions that matter to stakeholders.